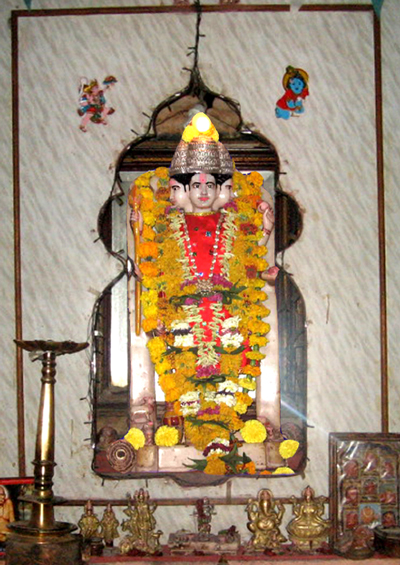 The path of Dattatreya embraces all spiritual paths and is the source of all other traditions. He who treads the path of Truth, regardless of what religion he belongs to, is treading the path of Dattatreya. As an incarnation of God, Datta came down to spread the universality of true religion. Anyone can be his follower, regardless of cast, creed, status, be they student, householder, recluse or renunciate. No matter what sect or religion the true seeker follows, eventually he comes under the guidance of Lord Dattatreya, the Eternal Spiritual Guide of all mankind.

Datta's presence is not limited to any one country or sphere, as He is the Guru of all Gurus, the all-seeing, all-powerful, ever-present link between God and Man. However, special places of worship (Datta Peethas) have grown up around sacred areas, where His presence is most strongly felt by the sincere seeker of Datta. These places include Suchindram, Senthamangalam, Mount Girnar, Nagalapuram in Andhra, Prayag, Datta Guha in the Himalayas, Gulbarga -Ganagapura, Narasimhavadi in Maharashtra, Quthambara near Poona, Avadumbara, Somapuram, Chandradronagiri and Datta Peetha at Sri Ganapathi Sachchidananda Ashrama, Mysore.

One notable aspect of these Datta Peethas is their indefinable but inseparable relationship with worship of God as Mother, the Supreme Energy -Shakti. (Hence, Sri Swamiji's fierce aspect as Mother Chamunda.) Parasurama (eighth incarnation of Lord Vishnu) approached Lord Dattatreya and was initiated into the intricacies of how to worship the Mother (Shreevidya Upaasana), before undertaking intense penance to obtain the grace of the Divine Mother.

The Saandilya Upanishad declares very clearly that Lord Dattatreya is the Supreme Reality and is the cause of everything that is created. It states, "The Supreme Brahman performed penance which was of the nature of knowledge (jnyana), and desiring to become many, assumed the form of Dattatreya. From that form came out the three letters A, U, M; the three mystical names Bhuh, Bhuvah and Svah; the three-lined Gayatri; the three Vedas Rig, Yajur and Sama; the three Gods Brahma, Vishnu and Maheswara; the three castes Brahmana, Kshatriya and Vysya; and the three fires Gaarhapatya, Ashavaneeya and Dakshina."

The lord is endowed with all wealth. He is all pervading and resides in the hearts of all beings. He is the great Maayavi, sporting with His own Maaya. He is Brahma. His Vishnu, He is Rudra. He is Indra and He is also all the gods of heaven and all other beings. He is East, He is West, He is North, He is South, He is below and He is above. He is everything. This is the glory of the form of Dattatreya.

Lord Dattatreya came as the Supreme Philosopher (Avadhoota) so that the true meaning and purpose of Sacrifice (Tyaaga) may be revealed to mankind. Atri, His father, symbolizes penance (tapas) as described in the scriptures, and Anasooya represents freedom from jealousy. When penance and non-jealous nature unite in a single person, the highest truth emerges as Lord Dattatreya. As ultimate self-sacrifice, the Supreme God gave Himself as Datta to Atri and Anasooya. Hence, "Datta" means not only "that which is given", but also as the ideal of "giving" without desire for reward, i.e. selfless giving. The whole life of Dattatreya shows us that this "giving" selflessly is the true renunciation/sacrifice. The significance of this sacrifice is stated in the Dattatreya Upanishad where the Lord says, "Not by action, not by progeny, nor even by self, but by renunciation (tyaaga) alone is immortality attained. "Real renunciation is the giving up of "I" and mine, not the mere abandoning of duties. Living a selfless life require giving up one's ego. That is what Lord Dattatreya describes as true sacrifice.

As a Yoga-Avatar, Lord Dattatreya teaches us to perform all our duties skillfully and diligently. Yoga does not require outside aids, nor does it demand great physical effort. All we have to do is change our outlook and transform our attitude to life. This "change" consists of giving up the idea or feeling of "doer ship", "enjoyer ship" and the resultant anxiety (and attachment) for the fruits of our actions. By performing all our duties with this changed outlook, our mind will be freed from agitation and attain the restful state called "equanimity", or the state where there is no "mind". This is the state of Bliss that every soul ultimately aspires to. This is the state of Datta - the ultimate Gift of God. Symbolically Lord Dattatreya is depicted with three heads, six hands, four dogs, standing in front of a cow and tree. In his hands He holds a drum (damaru), discus like weapon (chakra), conch shell (sankh), rosary (japa mala), water vessel (kamandala) and a trident (trisula).

All these attributes of the Lord have their esoteric meanings. The trident is used for killing the ego, and the drum is used to awaken those souls who are still sleeping in the slumber of ignorance. Lord Datta's conch shell is used to sound the OMKARA, the primordial sound and the first word of the Hindu scriptures. The divine AUM is composed of Akara - the Creator/Initiator, Brahma; Ukara - Sustainer/Protector, Vishnu; Makara - Destroyer/Terminator, Maheswara. When mixed together in the conch of the Lord, they sound as the eternal Omkara - Datta.

OM is an essential sound. With every breath our lungs resonate the Omkara. So-hum...So-hum... I am the world, I am the universe, I am Lord Shiva, I am Lord Vishnu... We are always chanting this mantra, even when we are walking, talking, eating or sleeping. The speed with which we sound this So-hum may change with our bodily activity, but the So-hum remains eternal. When the body stops resonating with this divine sound, the soul seeks another residence. All living creatures, even animals resonate this AUM in their body. In Sanskrit, "Datta" means gift, hence, Omkara is the eternal gift of God to all souls.

Lord Dattatreya is also holding a rotating chakra. It is a round circle with no beginning and no end. Like the universe, it too is constantly moving, always in a flux. He uses this chakra to destroy all kinds of karmic bonds of His devotees. His right hand holds a rosary -japa mala. With this the Lord counts His devotees, liberating them by merely thinking of their name. In another hand the Lord is carrying the water pot -kamandala. This holds the nectar of pure wisdom. With this He revives the souls thirsty for knowledge, liberating them from the endless cycle of life and death.

The four dogs of Dattatreya are the embodiments of the four Vedas. They follow the Lord as "hounds of heaven, watchdogs of the ultimate Truth". They help the Lord in "hunting" and finding pure souls, wherever they may be born. Behind the Lord Dattatreya is the cow named Kamadhenu. This divine cow grants the wishes and desires of all those who seek the Lord. She grants all material and spiritual wishes of the Lord's devotees.

The Lord stands in front of the Audumbara tree. This is the celestial wish yielding tree. It fulfills the wishes of those who prostrate before it. Audumbara is the bearer of nectar, and wherever it is found, Lord Dattatreya is always found in its shade.